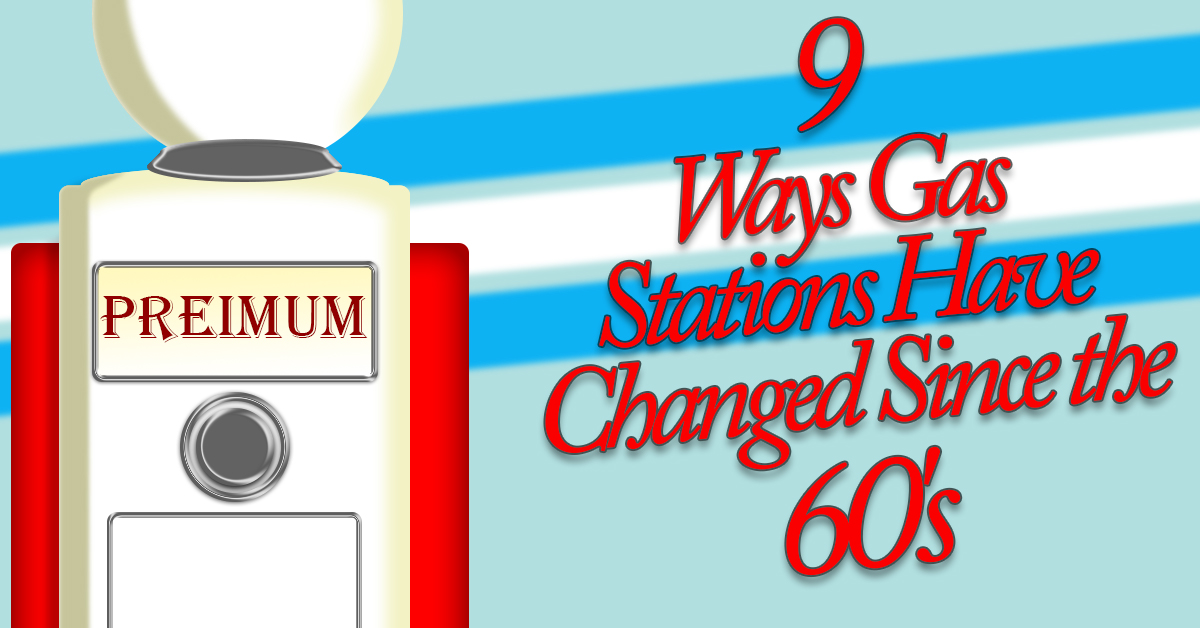 The sixties were a time of change. This is especially true when it comes to the role gas stations played in our lives. Gas stations served as a way for young men to enter the workforce; serving as gas jockeys, pumping gas. It was a time when oil companies competed eagerly for customers and gas stations stood upon just about every street corner. Oh, gas stations still exists, but here are 9 ways which they changed since the 1960s.

Gas was pumped by attendants who would wash your windshield and check your oil while pumping gas. Most offered basic car care services like brakes, shock replacement and tires.

If they weren’t wearing full jumpsuits, most gas station employees at least wore a shirt with their name embroidered upon it along with the oil company logo.

Imagine gas prices that were in the teens for most of the decade. Buying gas for 19.9 cents per gallon was not uncommon and fuel mileage was not a concern.

Gas stations frequently offered incentives for “fill-ups”. Drivers could collect a variety of items like drinking gasses, ashtrays or other household items just for stopping at the same brand. Many gas stations offered prizes and contests for loyal customers. Free maps were commonplace.

Depending on region, Top Value, Eagle or S&H Green Stamps were given to customers based upon the amount of their purchase. These stamps were used to fill up booklets that could be redeemed for prizes.

If an attendant didn’t offer to perform the task, drivers could actually fill their tires up without having to pay for the air. What a wild and crazy time.

Anyone who drove into a gas station in the sixties will remember the familiar “ding-ding” of the gas station bell. The bell was activated when a car drove over a rubber hose that alerted the attendant that someone was at the pump. It was time for them to spring into action.

While some names like Shell and Chevron remain, many others were gobbled up or went out of business. Senior drivers will remember Atlantic, Richfield, Sinclair, Conoco, Pure and others. Drivers tended to be more brand-loyal back in “the day”.

In the sixties, gas was a cash transaction. This led to attendants who often had large wads of cash they flipped through to provide change. Because gas was so inexpensive, many had coin changers attached to their belts to more easily dispense pennies, nickles, dimes and quarters.

While much has changed since the 1960s, it is still important to maintain appropriate car insurance. We can help. Allow us to review your automobile policy and perhaps we can save you money. Our independent agents are pros at working with a variety of companies, seeking the best coverage and rates. Contact us today.