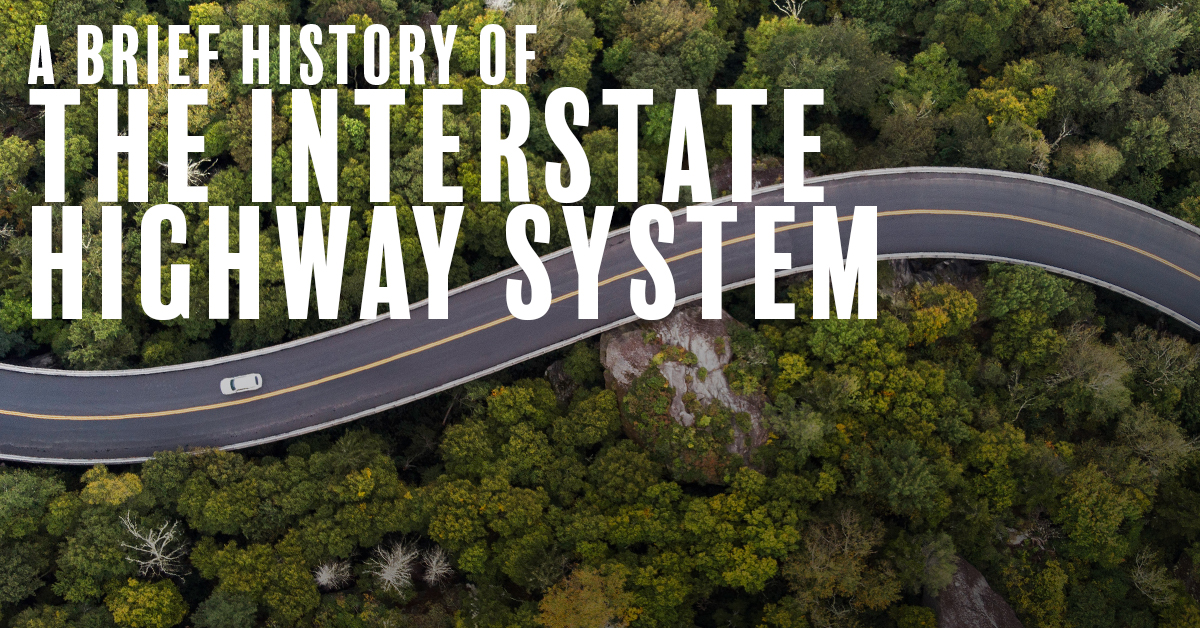 Most of us take our interstate highways for granted. We may even get frustrated with construction or heavy traffic in metropolitan areas. But imagine traveling without it. There was a time in this country when it didn’t exist and travel was restricted to two lane roads, some of which were poorly paved. Here’s a brief history of the interstate system, some of which may surprise you.

The concept of a cross-country highway system was first mentioned in 1939, but the Federal-Aid Highway Act wasn’t passed until 1956. The Act allowed for the initial construction of over 40,000 miles of highway that would roughly crisscross the country in a North to South and East to West grid pattern. Today, North to South highways are given odd numbers and East to West roadways have even numbers.

It was initially called the “National System of Interstate and Defense Highways”. It would eventually be named after President Eisenhower who signed the Act. One of the significant factors leading to the development of the highway system was the development of the atomic bomb. The government felt such a highway system would be necessary in the evacuation of large cities in an atomic attack. In fact, the system was designed intentionally with multiple mile-long stretches of straightaways that could potentially be used as landing strips for military aircraft in an emergency.

While the project was initially met with support, actual construction resulted in protests. Families were displaced from their homes due to construction and communities were split. It is the reason some interstates simply end in some cities. It also led to some compromises, including outer belts.

The Interstate Highway System was officially considered “completed” on October 14, 1992 when a complex system of bridges and tunnels finished a 12-mile section of the highway in Glenwood Canyon in Colorado. Of course, construction, upgrades, and road widening continues on the system to this date. Today, the Interstate System all told, includes over 46,000 miles of roadways.

They can get crowded and dodging the seemingly endless orange construction barrels can be frustrating, but imagine life without them. The Interstate Highway System is perhaps one of the most under-rated engineering feats of modern man.

If it has been a while since you’ve had an auto insurance review, we invite you to contact u. Our independent insurance professional will seek out improved coverage at the best possible rates. We look forward to assisting you!

The Importance of an Exit Strategy

When is the Best Time to Shop for Auto Insurance?

Things Around Your Home Are Disappearing!

The Business of Business

Why is Life Insurance Least Expensive for Those Who May Need It Least?

What Impact Do Seatbelts Really Have?

Why Renters Insurance Is Important