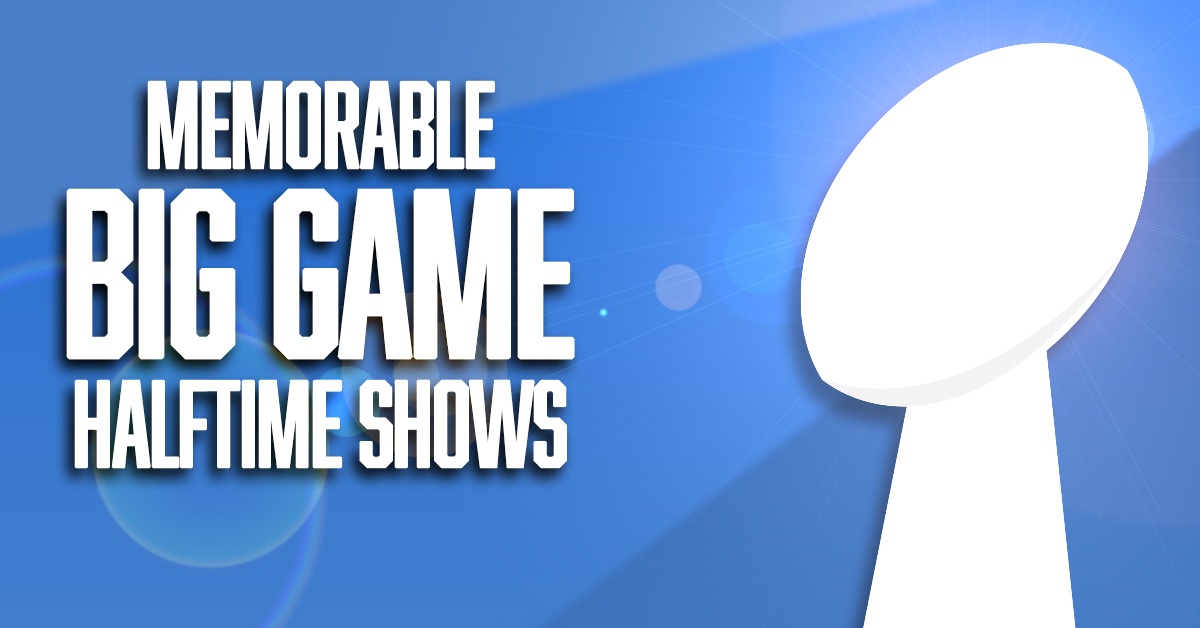 Sometimes it takes time and perspective to help us really appreciate what we have seen in the past. For NFL fans, there is no lack of ingredients to help us remember the most precious and rewarding moments of being a fan of our favorite team. Nor is there likely a shortage of the moments that caused us the greatest anguish. There was that moment when the Titans came up a yard short against the Rams. Who can forget when the Bills came up “wide-right” against the Giants in 1991, or when Joe Namath “guaranteed” victory to establish AFL legitimacy in 1969. All of these games had their winners and losers, but they also had something else. Halftime shows.

While we can root for one team or another, we can all have in common the quality, or lack thereof, of the halftime entertainment. Here are some of the most memorable halftime shows in Big Game history.

Most who saw this halftime show live couldn’t believe what they “thought” they saw. But they did. These two superstars were the focal point of the NFL’s ultimate annual game in 2004 when the infamous “wardrobe malfunction” took place. The Federal Communications Commission (FCC) received over a half-million complaints and the phrase “wardrobe malfunction” became a common part of the English language.

Janet’s brother Michael is given credit for taking the Big Game halftime show from marching bands to spectacular performances. His appearance in 1993 was gripping, mesmerizing and entertaining. It set the bar for halftime shows to come. The use of pyrotechnics, costumes, Jackson’s greatest hits and ability to hold an audience was spectacular.

In a haze of smoke and adorning a purple guitar, what could be better than this legendary performer playing “Purple Rain” in a downpour? It was in 2007 in Miami and the Colts defeated the Bears by 12. Unless you were from Indy or Chicago, however, you probably are more likely to remember this iconic performance than the game itself.

In 2017 Lady Gaga took the halftime show to new heights by dropping in from above the stadium in Houston, Texas. She started with renditions of “God Bless America” and “This Land Is Your Land” and then swung into action singing her greatest hits in a spectacular appearance that continued her path to super stardom.

What You May Not Know About Electric Vehicles

What You Should Know About College Living Spaces

Things You May Not Know About Radio

Want an SUV? Could It Be a Porsche?

Your Life Insurance Application Can Be Your Guide to Living Longer